Our Glencoe and West Highlands tours are popular because Glencoe is world famous, and the West Highlands are known for scenery and romance. We, at Inverness Tours, delight in taking you west and sharing these experiences with you. You travel in comfort during our private group tours due to our roomy and air-conditioned seven-passenger vehicles.

Getting to Glencoe and West Highlands of Scotland

We get to Glencoe, and the other locations in the West Highlands, by travelling down Loch Ness in the Great Glen. Eilean Donan Castle stands farther north than the other sites, but the rest are all found not far from Fort William on the west coast. Where we can, and when time permits, we like to return to Inverness by an alternative route, so you see as many diverse areas as possible. 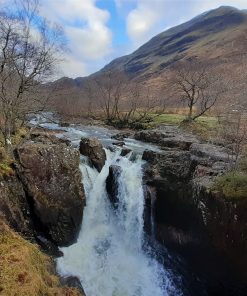 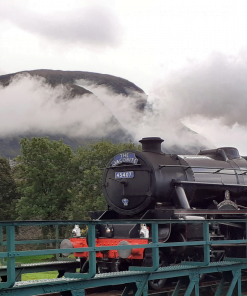 Our Tours to Glencoe and the West Highlands from Inverness

Our tours to Glencoe and the West Highlands from Inverness cover a broad range of country. Because of that we have four very different tours which reflect the diverse aspects of this area. Our longest day tour, due to the ferries involved, is to Mull, largest of the Inner Hebrides. Another tour of similar length is our Harry Potter tour. We have built in some walking time, to ensure you see the best of the filming sites. Our shortest tour is a trip to Eilean Donan Castle. And our scenic one day tour takes in Fort William and four of the most beautiful glens in the Highlands.

You have lots of choice on our one day tour from Inverness to Fort William and the Scenic Glens. Firstly we travel south, along Loch Ness and the Great Glen to Fort William. Then, because Glencoe, Glenfinnan and Glen Nevis are all within easy reach, you can enjoy all three. We will return to Inverness through the Cairngorm National Park.

If you enjoy a ferry ride in spectacular surroundings then this one day tour from Inverness is for you. It has no less than two such return crossings. You travel down Loch Ness, through Fort William and onto the Isle of Mull. You will visit ancient Duart Castle before recrossing the sea and returning by an alternate route.

You will travel west by Loch Ness on this short day tour to Eilean Donan Castle in the West Highlands from Inverness. You can choose to visit the castle, or if all you want is time for photographs then we could make a brief landfall on Skye.

Harry Potter in the Highlands Tour

You can find many of the film locations on our Harry Potter in the West Highlands Tour from Inverness. We can show you the site of Hagrid’s Cottage and the Forbidden Forest in Glencoe; the Quidditch Stadium site in Glen Nevis; Hogwarts locations at Glenfinnan and “the Harry Potter Bridge” on the West Highland Railway. And that is just for starters.

This railway line originally ran from near Glasgow to the port of Mallaig. Nowadays West Coast Railways use the section from Fort William to Mallaig for the well known Jacobite steam train. They are delighted that this route is often described as one of the greatest rail journeys in the world.

What is Glencoe famous for?

Glencoe is a valley with a deep and fascinating past. Fire created it, and ice shaped it. It stood witness to an awful human tragedy, the Massacre of Glencoe, and yet just a couple of hundred years later became one of the world’s first mountaineering areas. It is a treasure house for plants and wildlife and is a firm favourite with those who love its brooding grandeur

Read more about Glencoe and the West Highlands

How was Glencoe formed?

420 million years ago Glencoe was an exploding super volcano. So much hot lava was blown out that the earth’s surface sagged into a great basin – a caldera. We see the rocks of those eruptions all around us forming the mountains of the glen. In the last 2 million years a series of glaciers and ice sheets carved and gouged those rocks into new shapes. Now that the ice has melted, a mere 11,500 years ago, we finally see today’s Glencoe revealed.

The Massacre of Glencoe

In 1692 the reigning king, William II, ordered soldiers of the British Army to carry out the Glencoe Massacre. William and Mary had seized the throne from Mary’s father, James VII. James had many Highland supporters (Jacobites) so the government decided to exterminate a Highland Clan (the MacDonalds of Glencoe) as an example to cow the Jacobites. The soldiers that carried out the massacre had lived with their victims for twelve days prior to the event. Then they rose in the night and slaughtered their hosts. 38 died in the villages and uncounted others died in the snow trying to make their escape. Because the soldiers broke the rules of hospitality this has always been known as murder under trust. As a result, it is considered one of the most shocking attacks that the government has unleashed on the people of the Highlands.

The Peaks of Glencoe

Rock climbing was first pioneered 150 years ago in places like the Alps and Norway, and also Glencoe. Percy Unna was a keen climber who loved Glencoe and became president of the Scottish Mountaineering Club in the 1930’s. He purchased much of Glencoe to conserve it for the future, and presented it to the National Trust for Scotland.

Wildlife and Plants in Glencoe

If wildlife is your thing then Glencoe is for you. Red deer; roe deer; foxes; badgers; otters and pine marten all live here. Waterfowl, raptors, owls and woodpeckers can all be found. And when it comes to the flora – Glencoe has many rare arctic-alpines as well as mosses, liverworts and native woodland.

The National Trust for Scotland (Scotland’s leading conservation organisation) own most of the valley, thanks to Percy Unna’s vision. They run an award winning visitor centre with displays on the geology; history and the flora and fauna of the glen.

Glencoe and the West Highlands is our way of describing the western seaboard from Eilean Donan Castle southwards past Fort William and Oban, and even all the way to the Mull of Kintyre If you wished. So if you wanted to spend more days getting to know this fascinating area then we can accommodate that too. We can build a custom tour to your requested length adding any of your other desired places; activities or cultural experiences.